Even though house prices are not rising as steeply as they were at the beginning of the year and the fact that there is a huge housing crisis in the Capital with supply not even coming close to demand, it is very encouraging to hear that new figures show that £200 billion worth of new builds could be built over the next ten years.

Although nearly 600,000 new homes are actually needed to meet the growing need and demand from the 1 million people who are anticipated to move to London in the coming ten year. It is plain to see from the figures and maps below that this is a need easily met by building these much needed new builds and this could be met without ever needing to touch the capitals parks and green spaces.

Leading all boroughs with the wards with the highest number of new homes they could provide are the boroughs of Southwark and Tower Hamlets. Here is a list of the top wards in reverse order: 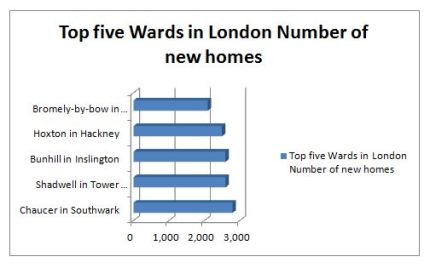 The city is an ever evolving and changing place buildings being erected, demolished and renovated, as well as spaces in the city finding new uses and developers ever looking for the next best place. As a result the property Hot spots around the city are changing all the time, the landscape of this city is changing and growing and in time there will not be just five or ten best places but twenty or more as all areas are made desirable.

It seems that London’s has an ever moving centre and with new business districts and huge redevelopment of areas to the east like Stratford and the Royal Docks its heart is currently moving East. This growth and popularity is spreading and not just moving but eventually all areas of this city will have great appeal.

This figure of £200bn in added value that these new homes could bring to London assumes an average price of £350,000 for a property in today’s market and does not take into account price increases that will inevitably happen in the future. In conclusion The capital could have a total property value increase 13 per cent on the £1.51tn total as estimated in the middle of this year.

This map shows how that value will be distributed across London, red is up to £2bn of potential value and blue is £250m:

Both London’s inevitable population growth and it economic renaissance over the next decade make those planning a new schemes very reassured of their likeliness for great success. These figures all take in to account what the need is expected to be. It also looks at density of growth being in keeping with the current density of the areas themselves as well as the actual developments being in tune with this.

This is all great news for those looking to buy, those looking to sell and those building. The capital is ever growing and changing and will look very different in ten years in every way, financial, culturally and in its landscape.

This site uses Akismet to reduce spam. Learn how your comment data is processed.